This large floor to ceiling sanctuary window measures approximately five metres wide by five metres high. The theme of “The Creation” was chosen by Fr Daniel Carroll. A scale coloured drawing was developed and approved by a small committee. The full size drawing of the window was executed on paper on the floor of the local Belli Hall which was hired for the occasion.

A centre point four metres above the top of the window was established, and is intended to symbolise the presence of God the Creator. Seven arcs, each about seven hundred millimetres in width were drawn using this point as their centre. They represent the days of creation.   The top arc represents deep space, and includes the Southern Cross, and a meteor. The second arc contains the planets of the solar system including the sun and our moon. They are portrayed against a background of dark blue cosmic dust. The next arc represents the formation of the land, and depicts many of the mountain ranges around Brisbane. The most southerly is Mount Warning, the most westerly is Cunningham’s Gap and the most northerly is Mount Ninderry.  Local birds, a bat and a sugar glider can be seen flying in the sky which is represented by blues and white clouds. The next arc represents the creation of the plants and includes eucalypts, rainforest trees, their leaves, and many flowers – all of which are local to Brisbane. Wheat and grapes are included for obvious symbolic reasons. The arc below the plants represents the creation of the land animals and includes many native Australian animals including emus, kangaroos, and smaller marsupials such as bilbies and potoroos. A koala dozes, and a possum hangs by its tail. Laying a peace in the centre of the window are the newly created Adam and Eve. Below them are footprints of the animals as they emerged out of the sea and have “gone forth and multiplied”. The footprints are intended to evoke the famous dinosaur footprints at Winton. The next arc plunges into the sea. There are two amphibians depicted between the land and the sea – a turtle and a crocodile. The fishes are all local Queensland fish and included is a lungfish and a platypus.  The last arcs depict the larger fish and mammals, and include dolphins, seals, sharks, rays, and at the base of the window, three types of whales.

The window is divided into four sections by the cross in the centre of the window which logically became the centre and focus for the rest of the composition.   The centre of the cross is the starting point of a series of brilliantly coloured discontinuous rays which are centred on the figure of Christ.

A set of four large rings is also centred on the cross. These are intended to give the idea of creation flowing outwards, rippling through space. These rings are also discontinuous to prevent them becoming repetitive and monotonous.

The rings nearest the centre of the cross are a series of eccentric circles. This is intended to depict the startling diversity and power of creation. The white glass forms a halo behind the figure of Christ. Rays of light and creation burst through it. There is a confusion of colour in this vigorous space at the centre of the window. Some of the colours from the blue of deep space and the tail of the comet are down near the mountains, and parts of the colours of the mountains are up amongst the planets. Part of this creative energy is a white dove representing the Holy Spirit bursting forth. In this way, the Trinity is expressed in the window with God the Father, God the Son, and God the Holy Spirit all incorporated into the window.

It was intentional to cryptically hide animals and plants in the window. They are suggested by enigmatic shapes. We would like to think that these puzzling shapes will be identified by viewers over time.

Two different sorts of glass were used in the making of the window. All of the shapes of the plants and animals are made from American double rolled cathedral glass. This controls the light at the surface of the window and largely stops direct transmission of light. The rays and rings of creation are made of far more expensive and very beautiful French, German, Polish, and English mouth blown antique glass. It allows coloured light to be transmitted through the glass. It is intended that these colours should not only illuminate the window, but should burst into the church onto the reveals, and floor, and the celebrants and congregation.

Made by Gerry Cummins and Jill Stehn 2011 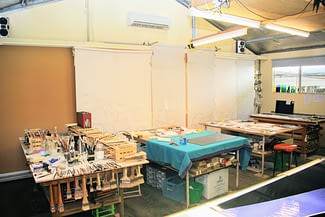 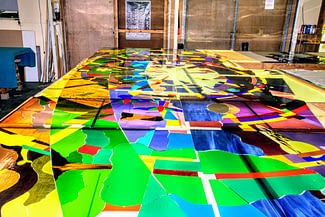 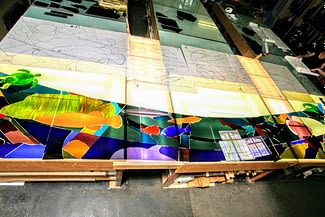 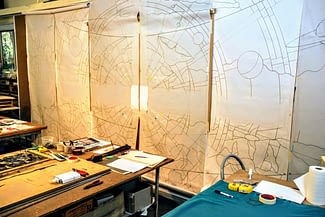