The theme for the window was chosen by Fr Dan Carroll, and it is an appropriate theme for a Church dedicated to the Twelve Apostles.

So, what happened out there in the lake? A carpenter went fishing with two, and then another two professional fishermen, and came back with four Apostles and the beginnings of a Church that is now nearly two thousand years old. It must have been something amazing. This is the central idea of the Jindalee window.

4 And when he had ceased speaking, he said to Simon, “Put out into the deep and let down your nets for a catch.” 5 And Simon answered, “Master, we toiled all night and took nothing! But at your word I will let down the nets.” 6 And when they had done this, they enclosed a great shoal of fish; and as their nets were breaking, 7 they beckoned to their partners in the other boat to come and help them. And they came and filled both the boats, so that they began to sink. 8 But when Simon Peter saw it, he fell down at Jesus’ knees, saying, “Depart from me, for I am a sinful man, 0 Lord.” 9 For he was astonished, and all that were with him, at the catch of fish which they had taken; 10 and so also were James and John, sons of Zebedee, who were partners with Simon. And Jesus said to Simon, “Do not be afraid; henceforth you will be catching men.” 11 And when they had brought their boats to land, they left everything and followed him.

The four fishermen must have realised an extraordinary thing was happening to have immediately became Apostles. This window represents the moment at which their lives are transformed by the presence of Jesus.

The window is large. It measures approximately 7 metres wide by approximately 5 metres high. It has a very strong horizontal format emphasised by the strong horizontal structural beam required for strength. Its size and position in the church offered an opportunity to both depict the event and to incorporate complementary symbolic meanings.

We wanted to counterbalance the strong horizontal format of the window with graceful vertical lines that would also enclose the space of the sanctuary.

We had stood in the Triforium of Laon Cathedral in France at the point where the great Gothic pointed arches spring heavenward from their pillars. We used images of those arches to provide a similar soaring top to this window.

Clu’ist’s head is the focus of these curved arches. They radiate outwards like ripples in a pond, and are intended to symbolise Christ’ s ministry spreading throughout the world. The colours are gold in the centre and form Christ’ s halo, and then move outwards on both sides through greens, aqua’s, blues, purples and violets. These colours are machine rolled glasses which diffuse the light at their surface.

There are twelve arches of more brightly coloured and vivid transparent mouth blown glasses inserted into this background. They represent the twelve Apostles. These colours are the complementary colours to their backgrounds, so that the red is against the green, the purple against the yellow, and so on across the entire top of the window. Some of these symbolic arches come down from the Heavens, some surround Christ and come around the Apostles, and some come into the boats and the water, uniting all the elements – both figurative and symbolic- in the window. Sometimes, for example, the Apostles think that they are holding on to a rope or the gunwale of a boat, but have instead already grasped a piece of Heaven.

We wanted the heads to be strongly linear and to be in character with the linear nature of the leadlight window. We wanted the four fishermen’s heads to be focused intently on Christ’s. They were experiencing something far beyond anything they had previously encountered, and all have turned to Christ for guidance.

Christ’s head should be young and enthusiastic, with his head thrust forward expectantly, as are his hands, inviting the four fishermen to become the first four Apostles. It is the beginning of his ministry. and he is full of youthful optimism for the task ahead of him. The mast and cross arm in Peter and Andrew’s boat is the only intimation of future events.

Romantic images of Christ and of the Apostles give them delicate, slender hands and fingers. We wanted the opposite. The five figures in the composition are a carpenter and four professional fishermen who use their hands and arms to earn their living. We wanted their hands to represent strength and utility, and with a good firm grasp on real objects, with obvious symbolic overtones.

The idea that the four Apostles are experiencing something extraordinary is emphasised in the way we drew the garments. The folds are drawn with nervous trembling lines as if they are shivering with excitement. The folds in James’ and John’s garments show they have their thighs and knees pressed hard against the gunwale to stop them falling out of their endangered boat.

In contrast. the folds in Christ’s garments are smooth elegant flowing lines which complement his calm. serene and purposive demeanor.

James and John’s boat at the right of the window is so overloaded with the weight of the fish in the nets that it is taking in water at the side while its prow is up out of the water at an alarming angle.

Peter and Andrew’s boat is full to sinking. The waves are lapping at the gunwale. The two fishermen are so afraid that the boat is about to sink that they have both sat down to try and stabilise it. Christ, however, is standing, and is quite unperturbed.

The Fish and the Ropes

We also used the ropes in the composition symbolically. Peter and Andrew had called James and John to come and help them. This is represented by the ropes going from boat to boat, and from hand to hand. Some have been dropped into the water, some have been abandoned, and some are very unprofessionally tangled and knotted. As with the nets, the fishermen have lost interest in them as their sole focus is now on Christ.

The nets are made into geometric patterns like spiders’ webs, and although the four men still have them in their hands, they have lost all interest in them. Not one of them is looking at their net. or what it is doing, or how many fish are or are not in them.

There is a branch of the visual arts that takes great satisfaction in analysing compositional elements. Most famously, for example, the thirteen figures in Da Vinci’s “Last Supper” can be divided into five triangular shapes. Compositional elements exist in this window. One element requires the priest to be standing behind the altar. This then forms a triangle between the head of Christ, Peter and the priest. This is deliberately symbolic. Peter is Christ’s successor, just as the priest is Peter’s. And is Christ looking at Peter, or at the priest, or both?

The window is essentially a leadlight, which uses sheets of coloured glass which are cut from a very big life-sized drawing, and are then held together with lead palms. Some of the more detailed pieces of glass- the faces, hands and some of the ropes – are kiln fired stained glass.

Two different types of glass were used in the making of the window. Much of the glass in the heavens, and all of the glass in the boats, nets, fish and water is American double rolled cathedral glass. This diffuses the light at the surface of the window and largely stops direct transmission of light. This window has utilised the full range of colours and textures of machine rolled glass, and this is particularly evident in the glass chosen for the fish and the ropes.

The rays, the arcs representing the twelve Apostles, the garments, and the heads and hands are made of far more expensive and very beautiful French, German, Polish, and English mouth blown antique glass. It allows coloured light to be transmitted through the glass, and symbolises the most important elements in the composition. 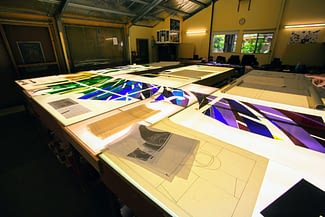 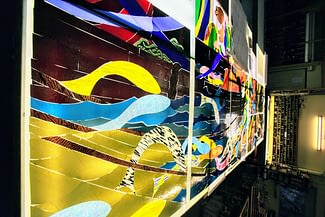